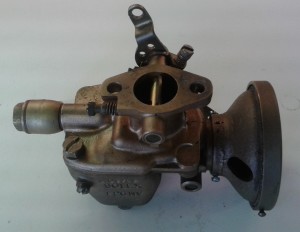 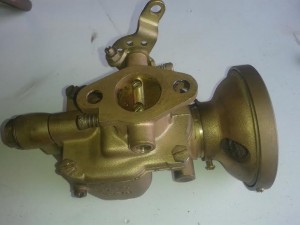 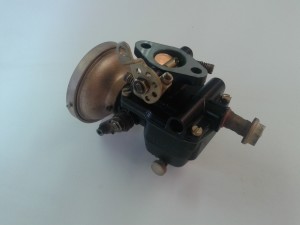 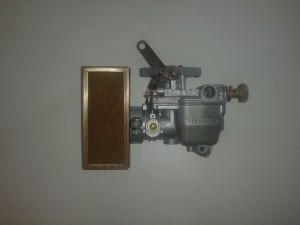 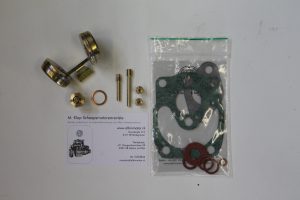 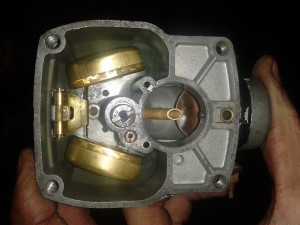 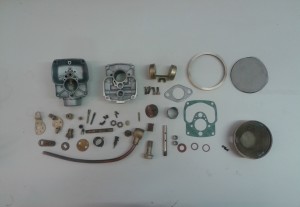 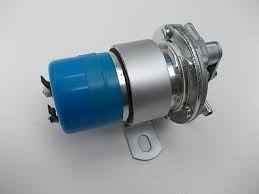 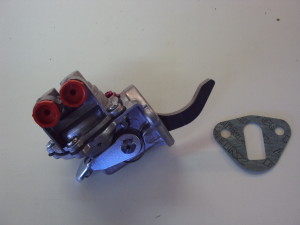 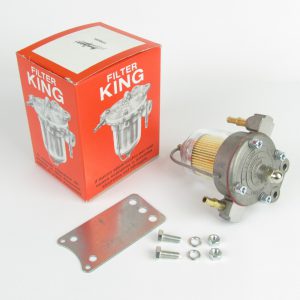 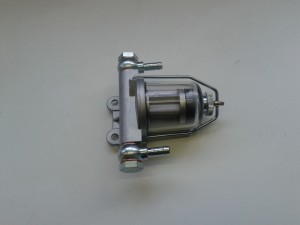 Originally a bronze or an aluminum Solex carburetor is mounted on the Albin gasoline engines:

When overhauling, the carburetor is completely taken apart and cleaned by blasting (glass beads) and ultrasonic cleaning. The clearance on the throttle valve spindle is minimized by replacing the shaft bearings and shaft if necessary. The gasket mounting surfaces of the carburator are also flattened in order to become 100% flat & sealing again. The float is replaced by a brass one that is resistant to today’s gasoline. The float angle and float height are set, the float hinge is fixed  (26 VBN), and the correct nozzle configuration is mounted in the carburetor (this may differ for every specific carburator and engine type!).

After installing a new brass float, the original membrane feed pump (O-22, MB10a) can no longer be used  unless a fuel filter with pressure regulator is placed between pump and carburetor. The same applies for electric fuel feed pumps, if any. The maximum allowable feed pressure is 0.2bar in case a brass float is mounted in the carburetor.

There are many opinions about the use of nowadays gasoline, and not all are good. Below you can find some comments which may be helpfull. Please note that below is also an opinion, taken from personal experience.

1. Which type of gasoline should I use?
For the Albin gasoline engines we recommend to use ‘premium’ gasoline (I.e. Shell V-Power, Total Excellium, BP Ultimate, etc). Generally speaking, these ‘premium’ gasolines seem to contain a lower amount of bio-ethanol compared to the commonly available E10 gasoline (formerly Euro95). Ask for information at the gas station if it is not clear which gasoline is being offered.

From technical point of view, E10 gasoline is fine for use in Albin petrol engines. However, E10 gasoline contains a percentage of bio-ethanol up to 10% (hence the name E10). This is disadvantageous for the carburetor, and also the fuel tank. Below some additional info is given.

2. Should I use lead replacement additives?
Albin engine dates from the time that leaded gasoline was the standard. Lead (tetraethyl lead) in the gasoline increases the octane number and protects the valve seats against impact, an oxide layer is formed on the seat. In addition, it provides for the lubrication of the valve stems and valve guides. Because the valve seats of an Albin gasoline engine are milled directly into the – relatively soft – cast iron of the cylinder block, the use of leaded gasoline has a positive influence on the service life of the valves and seats. Today, the use of lead in gasoline is prohibited for health reasons.

Because the disadvantages outweigh the benefits, and because an Albin is quite an ‘overzised’ engine and the number of operating hours on an annual basis is generally small, we do not recommend using a lead replacement additive with Albin gasoline engines. If the valve seats have already been replaced by hard steel rings (we do this as standard when overhauling), lead or lead replacement in the gasoline is no longer necessary anyway.

As an alternative to the lubricating effect of lead, so-called ‘top lubrication’ is a good alternative: mixing a small amount (1: 100) of lubricating oil with the gasoline. This has no noticeable effect on the performance of an Albin gasoline engine. 2-troke engine oil shall be used (not regular engine oil).

3. Ethanol in today’s gasoline: why and what are the consequences?
Forced by  EU law, gasoline producers are adding an increasing percentage of bioethanol to gasoline, in order to be able to meet the CO2 emissions requirements set in the future. The (plastic) float in the Solex 26 carburetors suffers from the ethanol, and aluminum parts (26 VBN, feed pumps) are also affected by corrosion.

The float in the carburetor of an Albin gasoline engine is made of a plastic that is softened under the influence of ethanol. The result: the float expands more as a result of the engine heat, and can get stuck in the float chamber, with the result that the fuelsupply is shut off. This happens in particular if the engine is stopped and restarted shortly thereafter. These problems often do not come alone, but together with other problems such as clogged cooling (engine and therefore carburetor become too hot), contaminated carburetor, etc. Since 2014 we have been selling brass floats as a replacement for the original plastic float, these are developed by Albin Sweden after years of testing.

Corrosion of aluminum parts due to ethanol in the gasoline leads to damage and clogging of the carburetor and also to the fuel feed pump (O-22, MB10a). Corrosion of aluminum due to ethanol in the gasoline is a process that is accelerated by the presence of water in the fuel. Water in the fuel tank as a result of condensation must be limited by a correct tank construction and the frequent draining of the water through a water separator. In addition, ethanol is hygroscopic (that is, ethanol extracts water vapor from air). This also has a negative impact on the fuel quality and corrosion of aluminum parts. The residue of internal aluminum corrosion can only be properly removed by means of glass blasting, followed by ultrasonic cleaning.

4. Tips & tricks
Below you find some tips & tricks to deal with nowadays gasoline as well as possible:
1. Refuel with ‘premium’ gasoline only. If this is not available, E10 could be used provided that preventive measures are taken into account.
2. Use ‘top lubrication’ (mix a little 2-stroke oil through the gasoline in the ratio 1: 100).
3. Use an additive which counteracts the adverse effects of ethanol in the gasoline.
4. Make sure the tank is completely filled when not in use to prevents condensation (water ingress) in the tank. However for standstill exceeding 3 months it is better to completely drain the tank.
5. Install a water separator and drain it regularly. If there is often a lot of water in the separator, the cause must be traced and solved.
6. Make sure the fuel filter is clean and replace it annually or clean it if it is a washable filter element.
7. Ensure that the tank is 100% clean and that the extraction point / drain is at the deepest point. If this is not the case, dirt will collect over the years and this will at some day clogg your filter / fuel feed line.
8. Drain the carburetor in the winter season. It is even better to fill the carburetor with fully synthetic gasoline (there is no ethanol in it). For example, Aspen 4-stroke gasoline can be used for this.

For safety reasons it is of great importance that the fuel ystem and its related components are completely leak free!